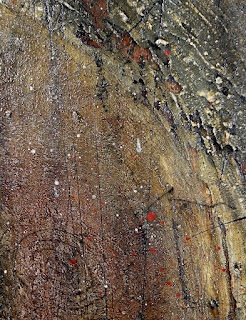 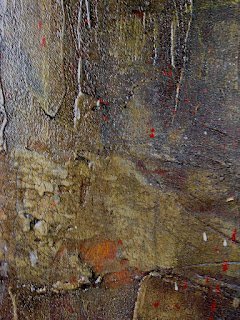 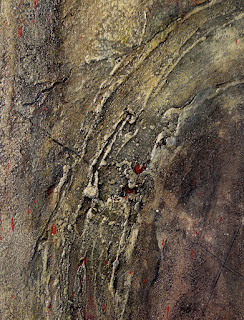 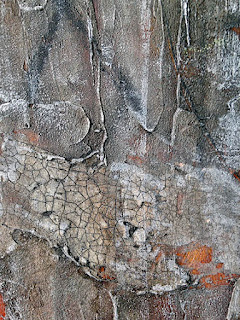 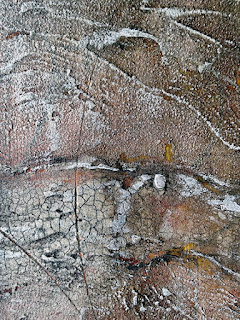 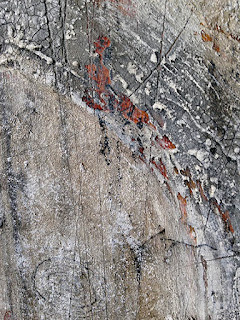 These photos are of details in my new work.
They show  'history' developing after about two weeks of building up the layers.
I began with acrylic media, sand, charcoal, pencil, pigments, and am now working on them with oil paint and cold wax medium, rolled, scraped, brushed, dribbled and blotted.  Today I rolled a thin white layer, a scumble, over them then scraped it back and tomorrow, if it's dry, I'll tone it with glazes....

All Bound Together: Small Works by Raemon Rolfe

An on-going theme for me is our connectedness with all living things and with the rocks, water, air and time.

Inspiration for these works came from a re-reading of Steinbeck's The Log from the Sea of Cortez, 1941.  He writes …

"....all things are one thing and that one thing is all things—plankton, a shimmering phosphorescence on the sea and the spinning planets and an expanding universe, all bound together by the elastic string of time. It is advisable to look from the tide pool to the stars and then back to the tide pool again."  (Steinbeck)


Richard Feynman’s poem, I Stand at the Sea was a source of ideas for the works in my 2018 show and the verse below inspired my new work.

Deep in the sea all molecules repeat the patterns
Of one another till complex new ones are formed.
They make others like themselves
And a new dance starts.

Further inspiration came from Nick Lane's book  The Vital Question:  Why is Life the Way it is,2015. Lane’s hypothesis provides an insight into the very beginning of life four billion years ago.
“All complex life on earth shares a common ancestor, a cell that arose from simple bacterial progenitors on just one occasion in four billion years. Was this a freak accident, or did other ‘experiments’ in the evolution of complexity fail? We don’t know. We do know that this common ancestor was already a very complex cell. It had more or less the same sophistication as one of your cells, and it passed this great complexity on not just to you and me but to all its descendants, from trees to bees." Nick Lane

According to Lane: rock, water and CO2 are the shopping list for life, and that the perfect conditions for life occurred deep in the sea in alkaline hydrothermal vents formed when seawater percolated down into the mantel rocks and reacted with olivine before bubbling back up again and forming large, warm, porous vents on the seafloor.

Media
Encaustic is the main medium used in the composite works. Encaustic paint comes down to us from Ancient Greece and may be the earliest form of easel painting. It is made by melting beeswax with dammar resin and adding pigment. The molten paint is applied quickly to the substrate and each layer is fused with a heat gun. In these works I’ve applied other materials to the surface, such as graphite and gold dust and then applied shellac and burnt it with a blowtorch to create texture.
The resulting surfaces are protected with a special encaustic sealer.
Some of these works may also include metals, sand, letterpress and collage elements often sourced from Powell  Native Animals of New Zealand 1959; I've had this much-loved little book since childhood. 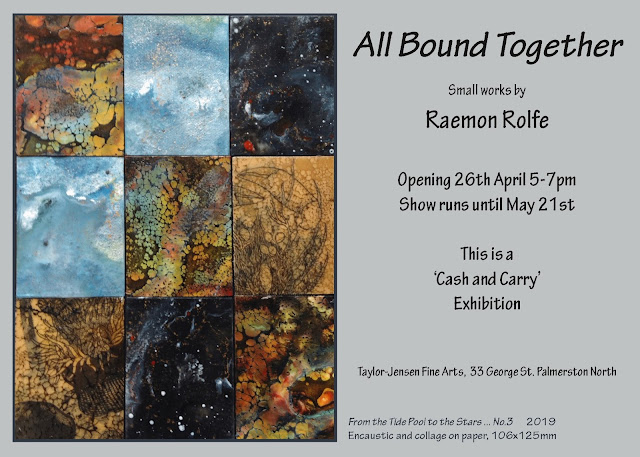 'The Infinite Smallness of Being', all ready and waiting. 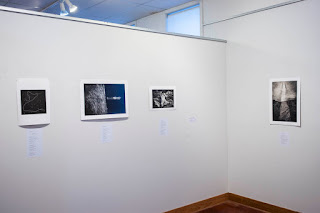 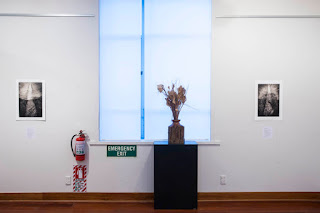 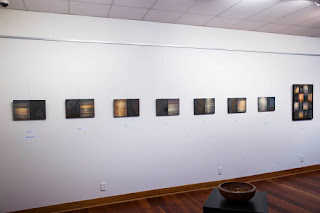 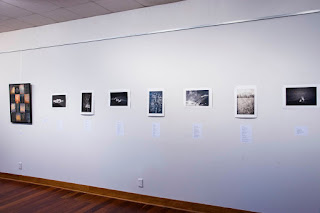 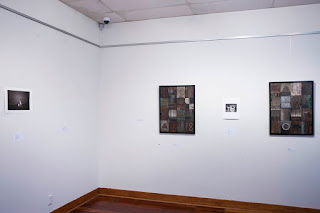 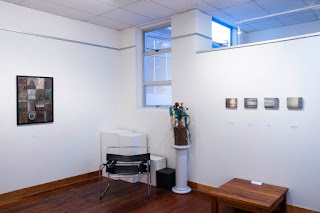 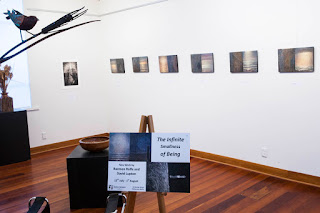 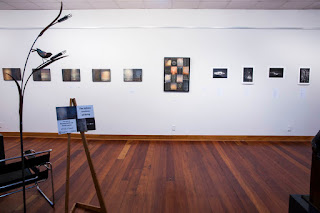 Thank you David Lupton for taking these photos.
Posted by Raemon at 17:12 No comments:

The idea that the atoms we are made of have consciousness and curiosity which enables us to wonder about our place in the universe is the theme of this series of seven small diptychs. The poem ‘An Atom in the Universe’  by Theoretical Physicist Richard Feynman (Poem and link below) provided the inspiration and the titles of the works.  I first heard about Richard Feynman at the superb Science Show presented by Prof Brian Cox and British comedian, Robin Ince, in Wellington last year.

The Exhibition opens Friday 13th at  5-7pm and will run until August 1st at
Taylor-Jensen Fine Arts   Contact Stuart Schwartz    finearts@taylor-jensen.co.nz  06 3554278
or me at  raemonrolfe@xtra.co.nz

An Atom in the Universe
By Richard P. Feynman

There are the rushing waves
mountains of molecules
each stupidly minding its own business
trillions apart
yet forming white surf in unison.

Ages on ages
before any eyes could see
year after year
thunderously pounding the shore as now.
For whom, for what?
On a dead planet
with no life to entertain.

Never at rest
tortured by energy
wasted prodigiously by the sun
poured into space
A mite makes the sea roar.

Deep in the sea
all molecules repeat
the patterns of one another
till complex new ones are formed.
They make others like themselves
and a new dance starts.

Out of the cradle
onto dry land
here it is
standing:
atoms with consciousness;
matter with curiosity.

Stands at the sea,
wonders at wondering: I
a universe of atoms
an atom in the universe.
Posted by Raemon at 18:13 No comments: